Since its early development in the 1930's and 1940's, WoodCreek's residents have been a closely knit community with the common goals of maintaining its beauty and residential integrity.

WoodCreek boundaries are Twelve Mile and Thirteen Mile Roads, on the south and north and Inkster and Middlebelt Roads, on the east and west. While there are now two other subdivisions within this area – WoodCreek and its over 330 homes occupies most of this square mile area.

WoodCreek is located in the Farmington Public Schools district with WoodCreek Elementary school found in the middle of the neighborhood. 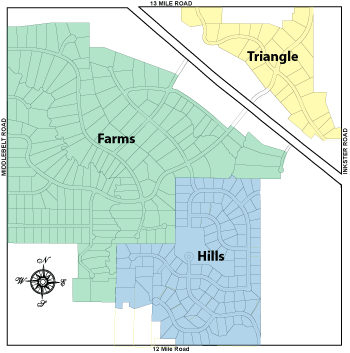 WoodCreek was formally platted in the mid-1940s by developer George Wellington Smith. The original plat included the land from Thirteen Mile road, south to Twelve Mile road and west to Middlebelt. The eastern boundary was somewhat irregular at our present Wellington Road. This area comprised what was called "WoodCreek Farms" – the original name for the development. Mr. Smith also was responsible for developing some the present village of Franklin.

The area north of Northwestern Highway and bounded by Thirteen Mile Road was called the "Triangle".

In the mid-1960's, developers Coleman and Moss proposed development from Wellington to Twelve Mile road – in an area occupied by the old Dean Farm. Once approved, this became "WoodCreek Hills".

While our overall areas may still be referred to as the Farms, Hills and Triangle - we are Woodcreek. We are a part of Farmington Hills in the county of Oakland. We are no longer an independent village as in the past – but we are much more than just a subdivision.

In the past, before the City of Farmington Hills was created in 1974, WoodCreek was governed in the 1940's by the WoodCreek Men's Association and then after 1957, by a Village Council that consisted of a president and four council members.

In 1943, a separate men's organization called the WoodCreek Farm's Civic Association was formed. The purposes were (much the same as our present organization):

Any dues-paying property owner could become a member of the Association. The annual dues for this group were $7.50. When WoodCreek later became a state sanctioned village, $2.50 would go to the Village Council treasurer. The Men's Association met eight times a year on the last Thursday of the month at 8:00 PM at a neighbor's home.

This group sponsored three annual events – a spring dance, an adult picnic and a Christmas dance.

The former WoodCreek Women's Association met in private neighbors' homes on the first Tuesday of each month. Among the activities were discussion of village business and the sewing of cancer pads that were donated to local charities and hospitals. Dues were $3.00 per year and any money remaining at the end of the year was donated to a local charity.

The Women's Association sponsored a pot luck summer luncheon and a Christmas luncheon.

The Junior WoodCreekers Association was formed to provide opportunities for WoodCreek kids to meet other children and engage in wholesome activities. Members were mothers who had children of ages from preschool through the sixth grade.

The membership fee was $1.00 – payable only once upon joining the group. Additional funding for activities was received from the Civic Association at the rate of $1.00 for each $7.50 paid as Civic Association dues.

Activities of the Junior WoodCreekers included a Halloween party, a winter ice skating party and a Family Fun Day.

The present WoodCreek Civic Association is registered as a Michigan non-profit corporation. The governing document is a set of bylaws adopted in 2013. All dues-paying property owners are considered voting members of the Association.

The stated purposes of the Association are:

The Association is governed by a WoodCreek board of directors with seven to thirteen members. The board is elected by the general membership at its annual meeting. Board members serve for three years or terms as may be determined by vacancies on the board. The officers of the Association consist of a President, Vice-president, Treasurer and Secretary elected by the board. All board members serve without compensation.

The Association publishes a periodic newsletter, the WoodCreek Playback. The Playback contains news of interest to WoodCreekers such as schedules of upcoming events and articles and pictures of WoodCreek activities.

The Association collects annual dues from Association members. The dues amounts vary and cover expenses for the activities of the Association including social events, publishing and distributing the WoodCreek Playback newsletter, care of WoodCreek public spaces and cul-de-sacs and winter snow plowing of all WoodCreek streets.

Among WoodCreek's business and social activities are:

The Natural History of WoodCreek – Geology

WoodCreek's natural character was formed over 12,000 years ago by the Wisconsin glacier that covered our area in mile-high ice. It has been 12,000 years since the last glacial ice sheet began receding from WoodCreek and the rest of Michigan. This signaled the end of the most recent glacial period, which began about 110,000 years ago.

As the ice withdrew, it left deposits of sand and rock in our area and along its edge were several prehistoric lakes that slowly retreated to the southeast. The lakes were named by geologists Lake Warren, Lake Whittlesey and Lake Maumee. The present Lake Erie is what remains of ancient Lake Warren.

When the glaciers left our region, all that was left was sand and rock – no trees or plants or topsoils. Our top soils and trees all developed in the centuries after the glaciers departed. The glacial sand and rock deposits were quite large in size and are called moraines. The moraine in our area is called the Defiance Moraine and continues all the way southwest to Fort Wayne, Indiana and south to Defiance, Ohio.

Woodcreek is at the northern edge of the ancient lakes' shores and in the middle of the moraine deposits. Consequently we have very sandy soils in many places and where the ancient lake shore resided, rows of rocks and boulders beneath the soil surface.

Cranbrook Institute of Science in 1945 published a map of these ancient lake shores. Of these lakes, the oldest, Lake Maumee, had its shores in WoodCreek and in communities to the southwest. Within WoodCreek, the waves of Lake Maumee arranged the sand and rocks of the glacial deposits. Deposits vary but include boulders (lake shores), water-laid sand and rocks and sand. Over 4,000 years as these lakes grew and then receded, they left shore lines that we can see today. Standing at Northwestern Highway and Thirteen Mile Road and looking towards Detroit, the undulations of the shores of our ancient lakes can be clearly discerned.

One major WoodCreek natural feature is Pebble Creek which courses through the middle of the area. Pebble Creek is a part of the Upper Rouge River system and is a part of the prehistoric water system created by the glaciers. Because of this prominent watercourse, WoodCreek's topography is quite varied – from flat to hilly with several very deep valleys. The topography drops significantly – over 100 feet – from Thirteen Mile Road and Northwestern Highway to Twelve Mile Road and Inkster Road.

WoodCreek has several artesian wells – wells that run constantly under their own natural water pressure.

The Natural History of WoodCreek – Wildlife

While the Mastodons have long gone from our area (Mastodon bones have been found nearby) and so have the ancient Elk, we still have a plethora of wildlife to bring enjoyment into our lives. They may be considered a mixed blessing as our garden plants and vegetables disappear when our foraging animal friends come around in the evenings.

Among the animal species we are fortunate to still have in WoodCreek are:

Also plentiful are aquatic creatures that frequent the numerous ponds and damps in WoodCreek. There are still snakes here, mostly the small and harmless Garter snake

The birds that frequent WoodCreek, either year-round or in transit to summer or winter nesting areas are almost too numerous to mention. While the pheasants and quail are now absent, dozens of varieties can be seen at birdfeeders and in our skies. One of our newest avian visitors is the Wild Turkey.