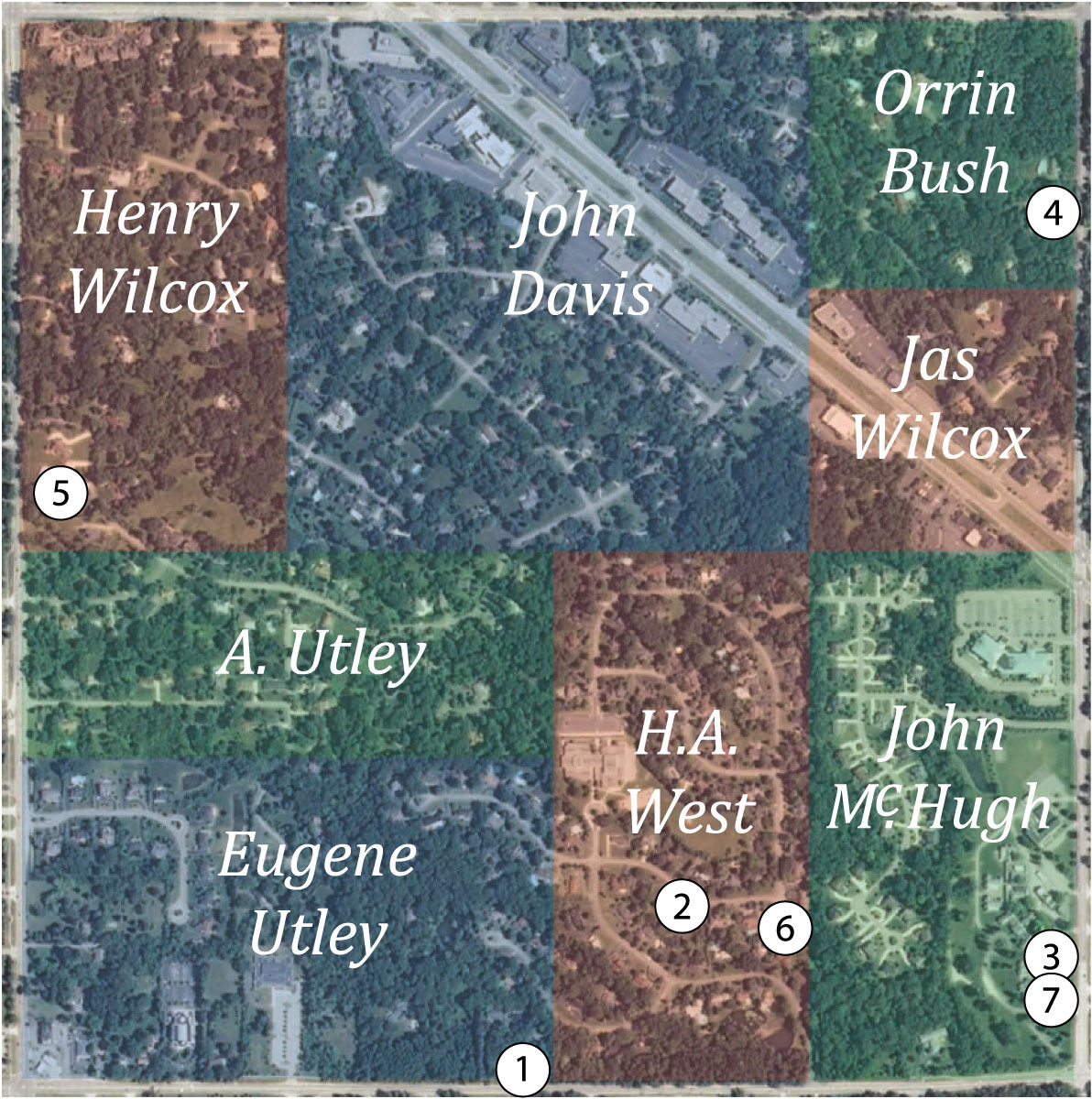 In the picture above, the old land divisions have been overlayed onto a 2012 aerial view. Note how the tree lines still clearly divide the area.

There are a number of historic sites within the map's area, some of which post date it or that were moved here some time after they were built. They are numbered on the picture to the left. The links under each property name will take you to a description in a City of Farmington Hills Historic District Commission document. 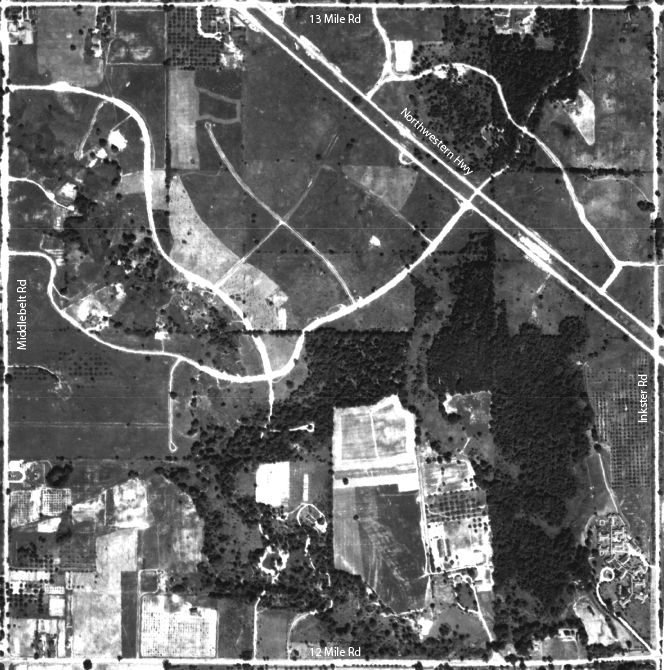 This view is from a US Geographical Survey (USGS) aerial survey.

Note that the area is largely farmland with what appears to be fields and orchards along with some remaining woodland. Although the roads in the Farms and Triangle seem to be either developed or outlined as tracks, there are very few houses. 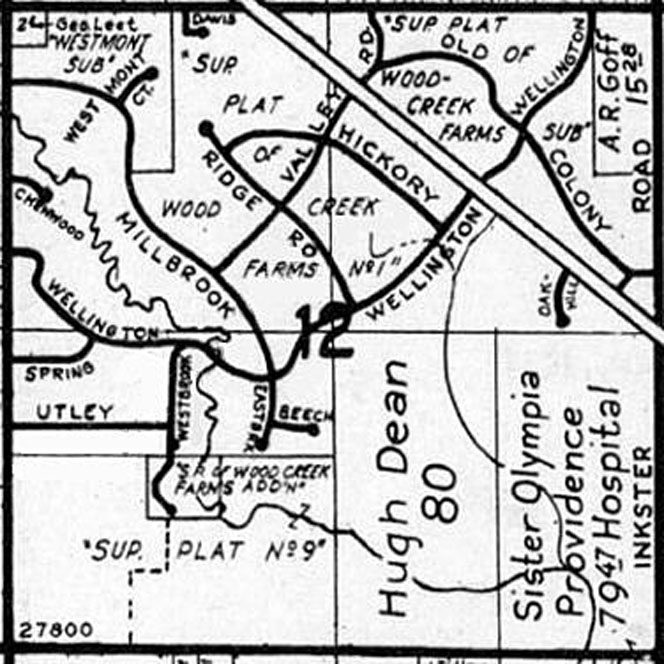 This map is dated 1947. Interestingly, some road names are different from today's, notably what we know as Village is Hickory, Salem is Ridge and Overdale is Oak Hill.

Also, when comparing to the photo above, note how Westbrook now extends past the tree line into another plat of land. Those plats still exist today as can be seen if you view our plats map. 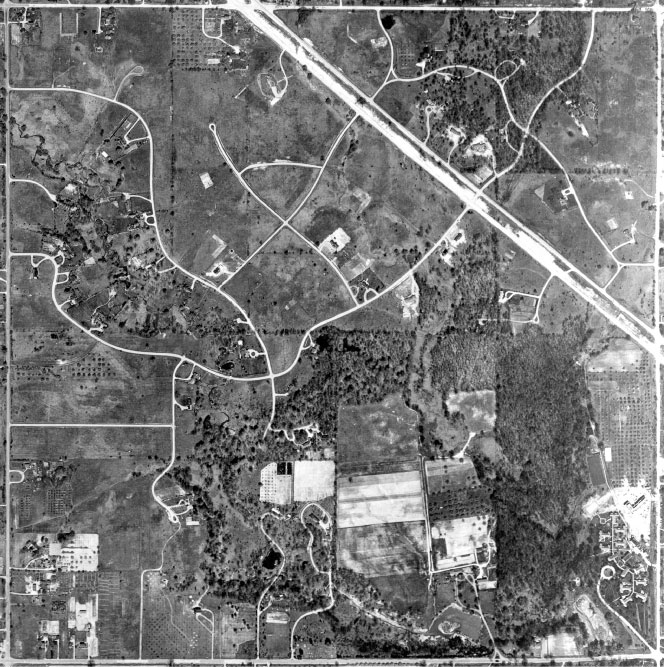 This image is just a small section from a large area aerial photograph donated to Wayne State University by Detroit Energy. It was taken on May 3rd, 1949.

This image shows the pond, excavated in 1927 and removed in 2011, where the future Danvers Dr meets 12 Mile Road. There appears to be an island in it, evidence perhaps that it silted up even then. You can see this and other features much more clearly in a much higher resolution image is available here. 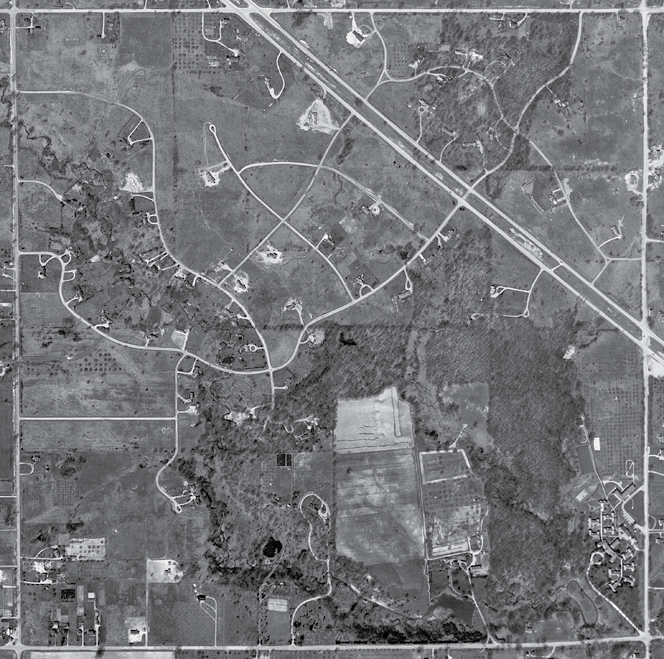 Not much seems to have changed since the previous image was taken but keen eyed observers will see some additional dwellings in the Farms and Triangle. Village Lane seems to have been made up at its south-eastern end. 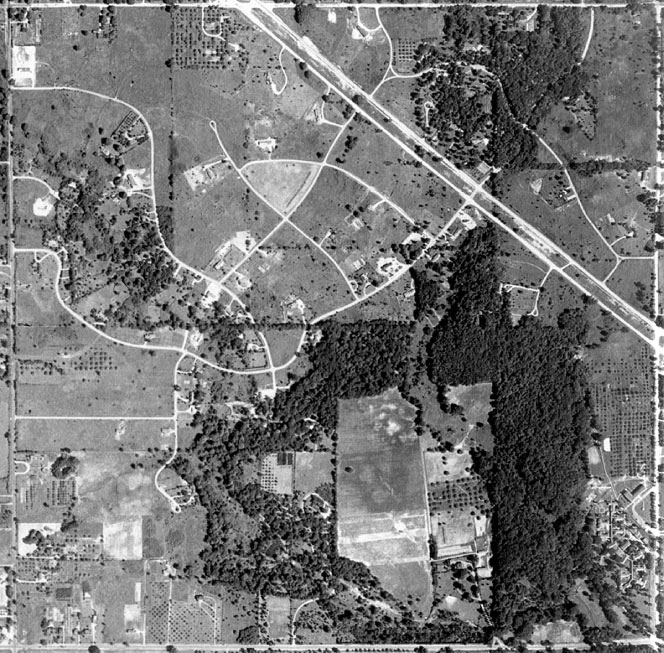 This image is from a large area aerial photograph donated to Wayne State University by Detroit Energy. It was taken on August 1st, 1952.

Obviously, not much has changed in one year, but this image is included because some features are more clearly defined depending on which you look at. One item of note, Utley Road has gained its first house. 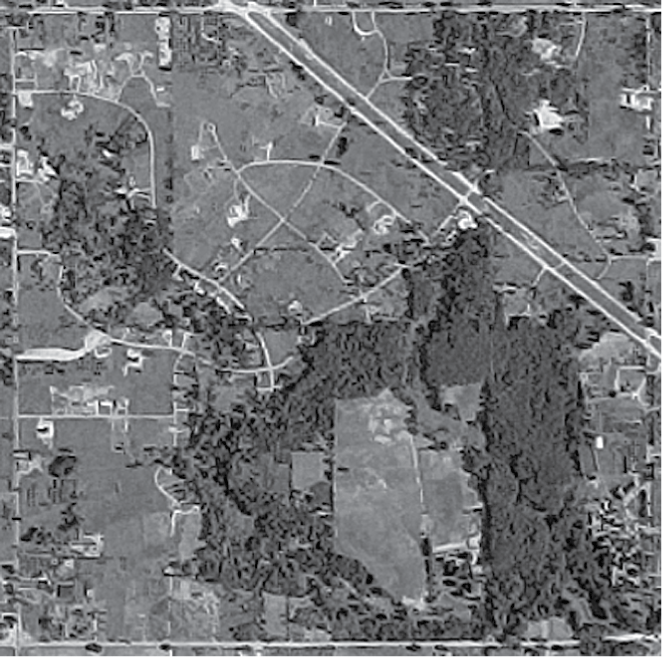 This is a relatively low resolution image but some changes from the previous view can nevertheless be seen. Utley Road has gained some buildings and, even accounting for the fact that this picture was taken nearly 2 months later in the season than the one above, trees around dwellings, particularly between Millbrook and Wellington, seem much larger. 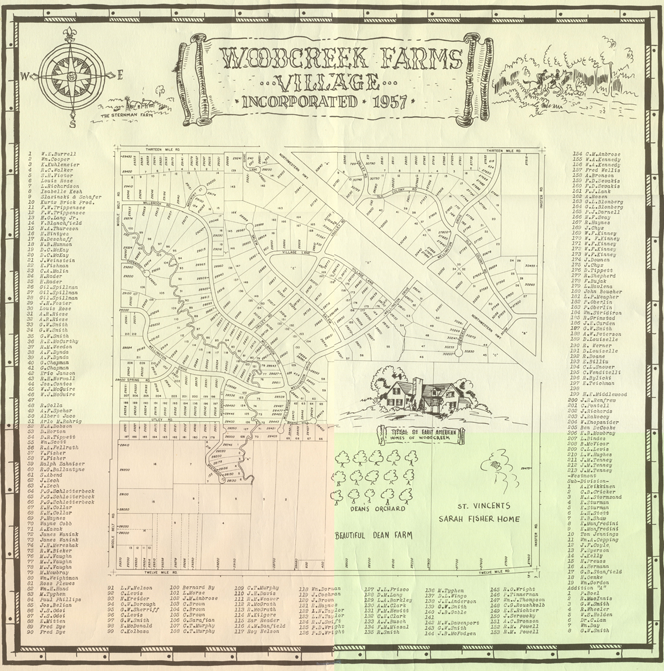 This map was provided by a WoodCreek resident. It shows the Farms in 1957. Each lot has a number that cross-refrences to the name of the owner listed on each side.

Click on the map to see a much larger view. 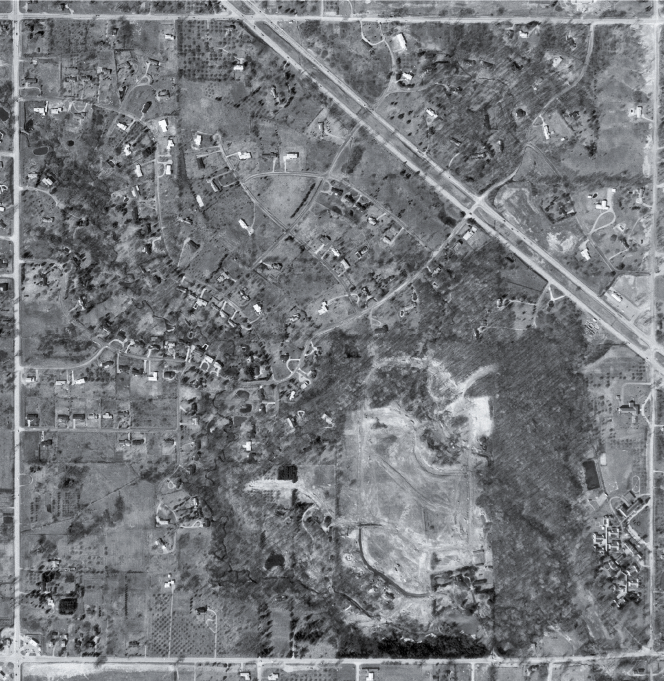 The Hills is now a construction site and the outlines of what will be its roads can now be seen.

In the Farms, new buildings have sprung up everywhere. 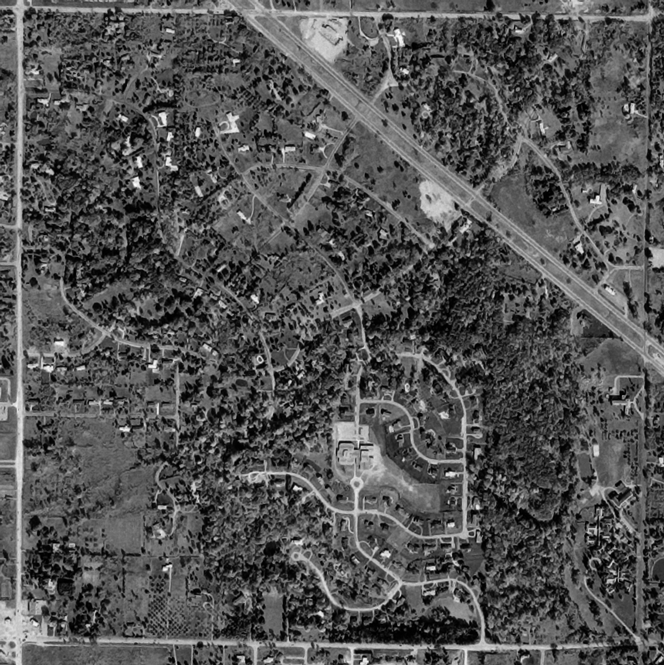 This fairly low resolution USGS image was taken from 12,000 feet on December 1st, 1973 and is remarkable because of the amount of tree cover, even at that time of year.

The Hills, and WoodCreek as a whole, is very much as we know it today.

Northwestern Hwy is notable for the lack of development along it compared to today. 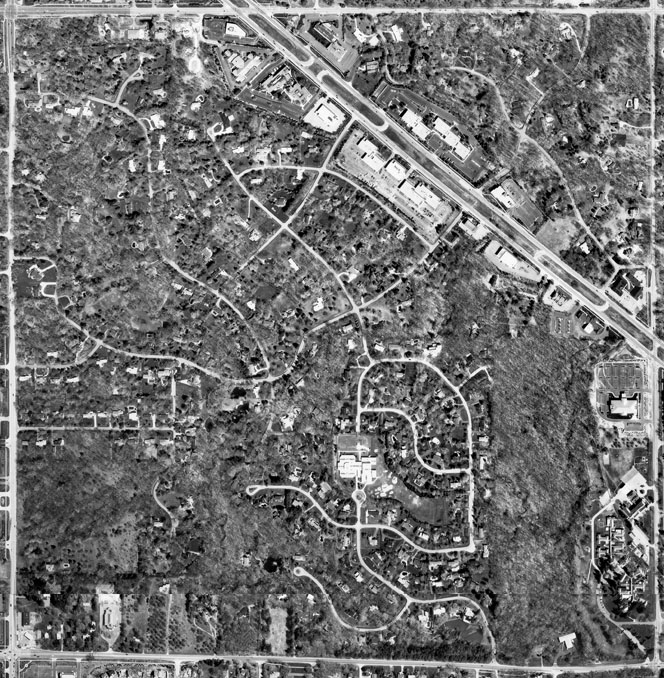 This image is a composite made from a number of aerial photographs donated to Wayne State University by Detroit Energy. The photographs were taken on May 4th, 1997.

Note the commercial development along Northwestern Hwy is now extensive, including the hospital on the north-west corner of Inkster and Northwestern.

A much higher resolution version may be viewed by clicking on the image to the left. 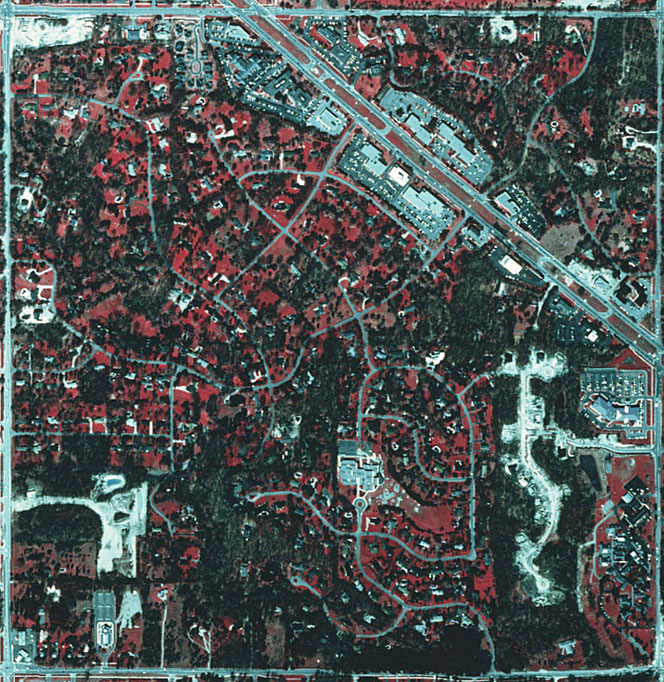 This image originates from the Michigan Department of Natural Resources. It was taken on March 28th, 1999.

Again, not much has changed in WoodCreek proper, but there is much building activity eslewhere in the square mile. Note the development of Bradmoor Ct (Hickory Oaks) in the south-east, Chateau Ct in the south-west and Chesnut Ct in the north-west corner.

This is a relatively low resolution image extracted from of a photograph of a very much larger area, but a slightly more detailed version may be seen by clicking on the picture to the left. 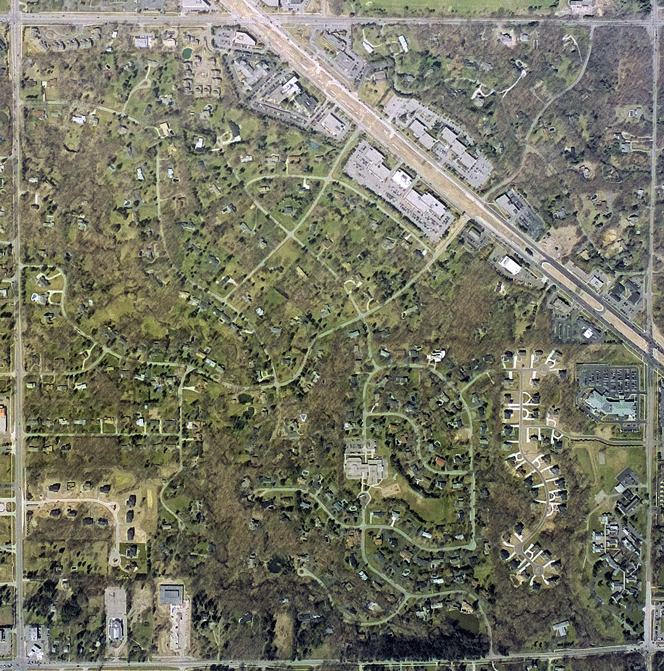 This is a Homeland Security image taken from 7,500 feet in April of 2002. Besides a few fill-in homes, little has changed in WoodCreek proper. The extension of Weymouth Dr into the new Hickory Oaks development in the south-east of the square mile is complete, as is Chateau Ct in the south-west and Chesnut Ct in the north-west.

For those that have fond memories of the pond at Danvers and 12 Mile, this is the last view we have of it. 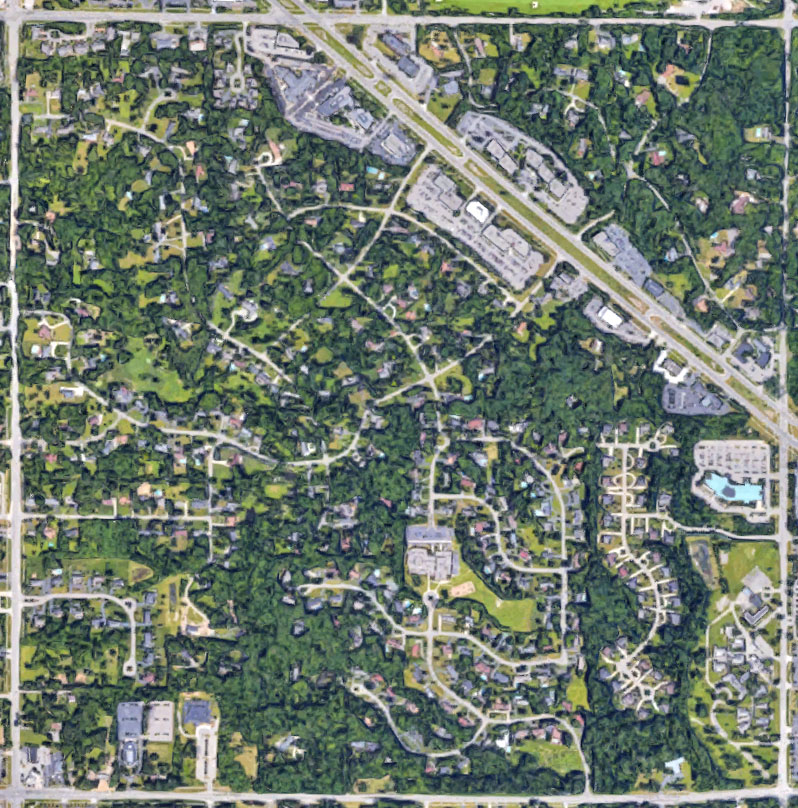 The image shown to the left is from the Google Maps site. Although Google describes it as a "satellite" view, like most of the high resolution images of friendly countries on its site, it was taken from an aircraft. The date any image may have been taken can depend on the zoom level.

Google Street View is available for all of WoodCreek. Go to the Google Map site by clicking or tapping on the image to the left and, once there, drag the little yellow man (called Pegman) from the bottom right of the screen to any road that becomes highlighted in blue. Once Pegman's feet are dropped on a location a street view is available. You can then move around and turn using the controls on the bottom right or by dragging you pointer around the image. More complete instructions are available here.

Comparing it to the earliest pictures on this page, in changing from agricultural to residential usage, WoodCreek has paradoxically become somewhat more like the ancient forest that once grew here.