The Hills & Dales of WoodCreek

Anyone who has walked, run or ridden a bicycle in WoodCreek will have noticed that it's a rather hilly place. In fact from the lowest to the highest point in our square mile, the terrain changes a total of 135 feet.

The City of Farmington publishes a Planning and Community Development Atlas , which includes a number of useful maps, one of which is a contour map. The narrow map shows an extract with elevations represented by contour lines which follow terrain of equal height. In this case each line indicates a difference in elevation of 25 foot from its immediate neighbors. In the section illustrated, where Danvers Drive meets 12 Mile Road, it can be seen that the contour lines are very close together, indicating quite steep terrain. Because we live here, we know that the land falls sharply north of 12 Mile Rd toward where the pond once was. However, as there is no room to label each line in this section, to someone unfamiliar with the area, until they can trace at least 2 contours around to find legends indicating height, it could equally appear that the land rises as one goes north from12 Mile Road. 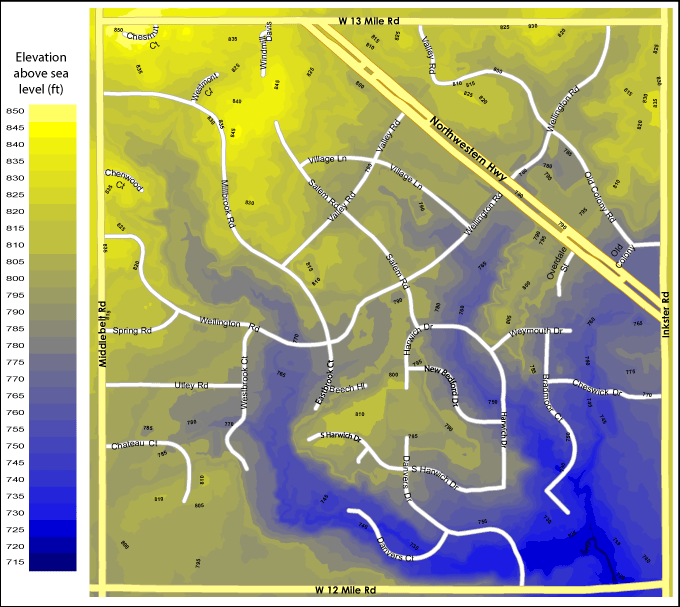 In an attempt to get a better snapshot of our square mile's terrain, using both the City's map and information now available from various satellite surveys, we have used color to indicate elevation above sea level. Here, the darkest color, navy blue in the south-east corner, indicates the lowest elevation of 715 foot, which not surprisingly is where our streams combine to exit WoodCreek on their way to join the Rouge River. At the other extreme, our highest elevation of 850 foot, represented by the lightest shade of yellow, is near the very north-west corner of the square mile, not far from the appropriately named Westmont Court.

Click or tap here or on the map for a larger view in PDF file that may be downloaded and printed.