DTE Energy supplies WoodCreek via a number of circuits with that result that, in the event of an outage that is not widespread, only a few homes may be affected. For this reason it is necessary to always report it to DTE at 1-800-477-4747 or on-line and not assume a neighbor has reported it.

DTE Energy has a regulated monopoly for the transmission and distribution of electricity in our area. However, Michigan Public Service Commission (MPSC) has begun to open the generation and supply of power under its Electric Choice program. The program will allow customers to purchase their electricity from an Alternative Electric Supplier (AES), however, under state law, no more than 10% of electricity maybe bought from an AES, and the program is currently fully subscribed. Consumers wishing to buy from an AES may still apply and will be put in a queue. For more information go to the MPSC website.

DTE has a number of discounted rates including:

A simple DTE Energy bill that does not include any of the special discounts listed above may still have some 11 different charges listed. Some are explained on the bill's footnotes and a rather rudimentary explanation will be found on the relevant DTE web page.

Natural Gas distribution for WoodCreek is managed and billed by Consumers Energy (1-800-477-5050) but gas may be purchased from a number of Alternative Gas Suppliers (AGS), listed here, under the Michigan Public Service Commission (MPSC) gas customer choice program.

Gas bought from Consumers Energy is price controlled by the MPSC, whereas that bought from an AGS may often be cheaper, but consumers are advised to study the details of the different programs available before making a choice. MPSC have published Consumer Tips and Making an Informed Choice to help gas customers make their decision. Note also that the actual price of gas usually only approximates to half of our total gas bills, other charges making up a significant proportion, see below.

A number of items contribute to the total billed by Consumers Energy each month. 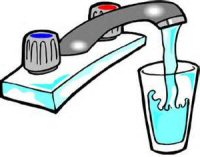 The WoodCreek subdivision is split in terms of Water and Sewage between the Farms and the Hills. (For definition of these terms, see our Maps page).

The overwhelming majority of homes in the Farms have private drilled wells and, like some 25% of the population, have an unsewered system typically consisting of a septic tank, a distribution box, and a rock-and-gravel-lined absorption field.

Homes in the Hills, on the other, are served by City water and sewage systems. The City has an good overview of the system on its website. Water is metered and charges are quoted per 1,000 cubic feet (7,480 gallons). It is presumed that the water used goes into the sewers and, as a result, sewage disposal rates are based on the amount of water used. About 43% of a typical water bill will be for sewage disposal. If you use a lot of water for irrigation or a swimming pool then that water does not go into the sewer and you may wish to consider installing a second meter for water used outside only, which will be billed without the sewer disposal charge. Installing such a meter currently costs about $800 and so it may take a number of years to recoup the investment. The City's Dual Meter Program page includes a worksheet that can help in deciding whether a second meter is worthwhile for you.